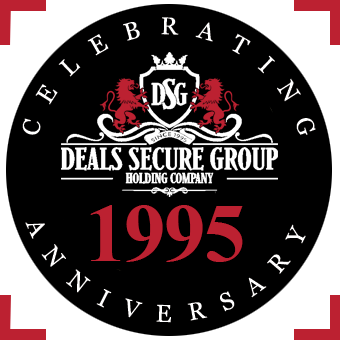 KUWAIT CITY, KUWAIT (AGENCIES) December 10, 2019 — Chairman’s Office of Deals Secure Group Holding Company, announced today that the Board Members at their Annual Meeting decided to adopt a new Silver Jubilee logo, which will be held by the Holding Company and its subsidiaries at the beginning of the year 2020.

Dr. Faisal Khazaal, Chairman of Deals Secure Group Holding Company, added “I was overwhelmed with great happiness when I saw the slogan. I remembered all the great events that have passed since we were founded in 1995 until today”.

It is worth mentioning that the group has officially moved from the United States of America to Kuwait after all shares were fully repurchased from the other owners in favor of Kuwaiti businessman, Dr. Faisal Khazaal. Negotiating the repurchase went on from the beginning of 2016 and ended on Monday, July 30, 2018, when the last shareholder transferred the last shares.

Deals Secure Group Holding Company (DSGH) has earned a reputation for quality and excellence as a premier investment holding company in worldwide regions. The company’s talented and committed workforce of 18,604 employees worldwide helps it create ideas, connect people, foster an entrepreneurial culture and uphold standards of professional excellence, and most importantly, its commitment to clients.

By the end of this year, the Group will comprise the following group of companies:

DSGH was incorporated in 1995. Since then, the group has grown substantially and made significant investments in a diversified portfolio of companies operating throughout the worldwide regions. DSGH principally operates in five major business sectors – Financial Services, Petroleum, Insurance, Media and Telecom. Its Group companies utilize the synergies that exist within each sector, as well as across sectors within the DSGH Group, to offer the best to its customers. DSGH continually seeks to improve the performance of its portfolio companies by encouraging the adoption of global best practices in managing their businesses.

Dr. David Hana, Director of Dr. Faisal Khazaal, LLD. Law Group, LP. Subsidiary of Deals Secure Group Holding Company), added “On this occasion, all DSGH’s subsidiaries have been instructed to put the Silver Jubilee logo on all their websites and publications as of the 1st of January 2020”.