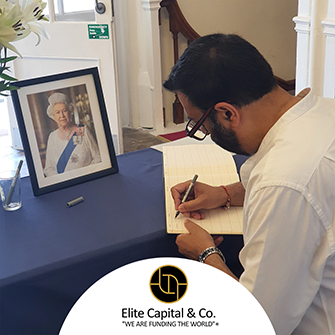 London, UK (AGENCIES) September 16, 2022 — Mr. Steven Adriell, Director of Business Relations Department at Elite Capital & Co. Limited, announced today that the company will reopen for business next Tuesday, September 20, 2022, after the official ceremonies to offer condolences for the passing of Her Majesty Queen Elizabeth II, in parallel with the announcement of the UK Government. Information source, UK Government website.

“In addition to Elite Capital & Co. Limited who offered condolences through the official website of the Royal Family, Mr. George Matharu, CEO of Elite Capital, also recorded his personal condolences at The Convent, Governor’s Residence, 285 Main St, Gibraltar GX11 1AA, during his visit with the company’s delegation to Gibraltar,” Mr. Steven Adriell said.

Elizabeth II (Elizabeth Alexandra Mary; 21 April 1926 – 8 September 2022) was Queen of the United Kingdom and other Commonwealth realms from 6 February 1952 until her death in 2022. She was queen regnant of 32 sovereign states during her lifetime and 15 at the time of her death. Her reign of 70 years and 214 days is the longest of any British monarch, the longest recorded of any female head of state in history, and the second-longest verified reign of any monarch in history.

Elizabeth was born in Mayfair, London, as the first child of the Duke and Duchess of York (later King George VI and Queen Elizabeth). Her father acceded to the throne in 1936 upon the abdication of his brother, King Edward VIII, making Elizabeth the heir presumptive. She was educated privately at home and began to undertake public duties during the Second World War, serving in the Auxiliary Territorial Service. In November 1947, she married Philip Mountbatten, a former prince of Greece and Denmark, and their marriage lasted 73 years until his death in April 2021. They had four children: Charles, Anne, Andrew, and Edward.

When her father died in February 1952, Elizabeth—then 25 years old—became queen of seven independent Commonwealth countries: the United Kingdom, Canada, Australia, New Zealand, South Africa, Pakistan, and Ceylon (known today as Sri Lanka), as well as Head of the Commonwealth. Elizabeth reigned as a constitutional monarch through major political changes such as the Troubles in Northern Ireland, devolution in the United Kingdom, the decolonisation of Africa, and the United Kingdom’s accession to the European Communities and withdrawal from the European Union. The number of her realms varied over time as territories gained independence and some realms became republics. Her many historic visits and meetings include state visits to China in 1986, Russia in 1994, and the Republic of Ireland in 2011, and meetings with five popes. 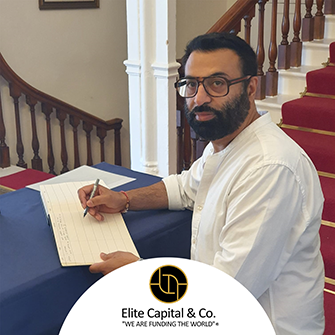 Significant events include Elizabeth’s coronation in 1953 and the celebrations of her Silver, Golden, Diamond, and Platinum jubilees in 1977, 2002, 2012, and 2022. She was served by 15 prime ministers during her reign, more than any other British monarch. Throughout her lifetime, support for the monarchy in the United Kingdom remained consistently high, as did her personal popularity. Elizabeth died aged 96 at Balmoral Castle, Aberdeenshire, in September 2022, and was succeeded by her eldest son, Charles III. — Information source, Queen Elizabeth II’s Wikipedia page.

Mr. Steven Adriell concluded his statement by saying, “The life of Queen Elizabeth II was recalled today, September 16, 2022, by playing a documentary film about Her Majesty to Elite Capital’s employees at the company’s headquarters. At the end of this occasion, on behalf of all Elite Capital & Co. Limited employees and their families, we present our loyalty to His Majesty King Charles III.” 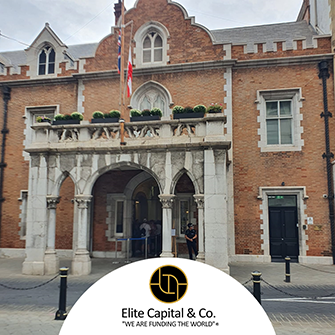