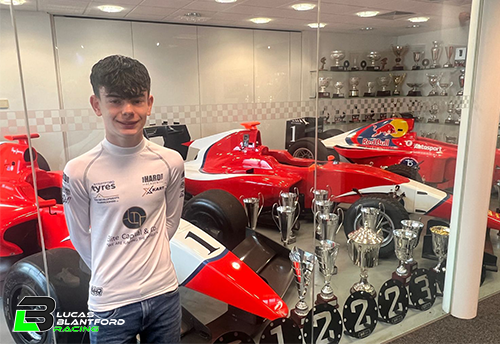 Stratford-upon-Avon, UK (Stratford Herald) June 13, 2022 — RISING star Lucas Blantford could be back on track to reach the top level of single-seater racing after joining a prestigious academy with links to the Formula One paddock.

The 13-year-old karter from Stratford, pictured, has been welcomed into the Young Racing Driver Academy which runs alongside Banbury-based Arden Motorsport – formed in 1997 by Gary Horner, the father of Oracle Red Bull Racing team principal Christian Horner.

Set up in 2013, the YRDA is overseen by Christian’s brother Jamie and is designed for drivers who show potential and determination to reach the very top.

With specialists in driver coaching, performance, mindset, media, marketing, management and legal, the YRDA gives all the tools necessary for young drivers to excel.

It also allows drivers to follow in the footsteps in some of the best talents in the world including Red Bull’s Sergio Perez, Ferrari’s Carlos Sainz and AlphaTauri’s Pierre Gasly.

On joining the YRDA, Blantford said: “After a long process, I am so glad to finally be a part of this prestigious academy especially as it is only my first year of racing.

“I’m excited for the team to bring out the potential that they saw in me from my first assessment with them and also from the racing track.

“Not only am I looking forward to the sim training, but also every other aspect of what it takes to be a top-level racing driver.

“2022 is turning into a big year for me and I would like to thank everyone who has been part of the journey so far.”

Jamie Horner added: “We are delighted that Lucas has joined the Young Racing Driver Academy. He has already impressed us during his training sessions in Arden’s race simulator.

“The talent that Lucas has shown combined with his mature and focused attitude bode very well for a successful future career in single-seaters.”

CEO George Matharu said: “Sponsoring a driver like Lucas and his fantastic team is a real investment in young British talent and the general racing community as a whole.”

Lucas’s father Adrian added: “We would like to thank Dr Faisal Khazaal, chairman of Elite Capital & Co. Limited, for his special interest in making this relationship a success, which we look forward to continuing for the coming years.”

Reaching Formula One had been the initial target for Blantford, but his ambitions were altered given the harsh reality of how much money was needed to compete in single-seater racing.

The focus switched to sportscars and aiming towards the British Touring Car Championship, the UK’s top motorsport series that has captivated millions of fans around the world since its inception in 1958.

Blantford’s hopes of reaching the BTCC were boosted after he was announced as one of just 15 drivers to join an academy run by series stalwarts Team HARD – launched by managing director Tony Gilham and led by academy manager Claire Murdoch.

Even though Blantford is part of the single-seater programme at YRDA, he will remain with the Team HARD academy to continue his development as a driver both on and off the track as they’re an important part of the journey up the motorsport ladder.