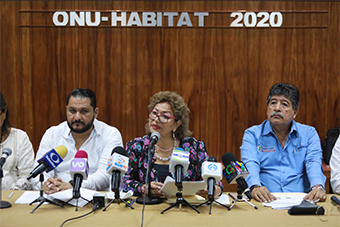 Acapulco, Mexico (H. Constitutional City Council of Acapulco) February 18, 2020 — Four groups of European investors specializing in sustainability are interested, so far, in the projects presented by the city of Acapulco at the World Urban Forum organized by UN Habitat, convention held from February 8th to February 13th in the city of Abu Dhabi, capital of the United Arab Emirates, municipal president Adela Román Ocampo reported.

“The trip to Abu Dhabi was a resounding success,” said the mayor at a press conference in the “Juan R. Escudero” town hall, where she was accompanied by the delegation that traveled with her to promote projects in the Middle East, as well as members of the building committee.

“We had the opportunity not only to present two very important projects to provide enough water to the municipality, but also to solve the financial problems of Capama,” added Román Ocampo, remarking to people from Acapulco: “We should be proud because we put Mexico’s name up high and Acapulco in particular. We went to present first level projects, before first level investors”.

The Company, Elite Capital & Co. Limited, originally from London, England, sent the first letter of intent on Monday to formalize its interest to participate in the execution of the project “Solar Energy for Water Sanitation in the City of Acapulco”, in a Public Private Partnership (PPP) with a 49 percent contribution from the federal government through Banobras.

The governmental portion corresponds to the subsidy granted in favor of the municipality of Acapulco for the benefit of its inhabitants, the rest of the investment, corresponding to 51 percent, will be provided by the company that presents the best proposals to rehabilitate 15 wastewater plants and the construction of a solar farm that generates 55.5 megawatts on 94 hectares, for the proper functioning of the water system in functions such as collection, conduction, distribution and treatment.

The other three international organizations that expressed their interest in investing in Acapulco projects during the presentations made at the National Congress Center in Abu Dhabi, are “Ciudades y Gobiernos Locales Unidos”, based in Barcelona; the “KWR Institute” of the Netherlands, and “Local Governments for Sustainability”, based in Germany, said the Secretary of Planning and Economic Development, René Vargas Pineda.

The director of the Potable Water and Sewerage Commission of the Municipality of Acapulco (Capama), Leonel Galindo González, said the project does not contemplate the privatization of the services provided by the municipality, because it will be a concession, which could be from 15 to 20 years, the one granted to the company that participates economically in the development of the solar farm.

The return on investment that the company that finances the project will obtain, will be for the sale of surplus energy generated by the solar panel system. Of the 55.5 megawatts, Capama would consume only 10 for all its needs without paying for consumption, saving 250 million pesos annually to invest in renovating and expanding its infrastructure; The remaining 45.5 megawatts will be sold to the Federal Electricity Commission (CFE) to supply its users.

With this plan, the Acapulco government has the objective of creating the first local sustainable water agency through solar energy, which allows operating with healthy finances, not affecting the environment through the receiving water bodies, in congruence with the sustainable development goals of the 2030 agenda of the United Nations.

It is necessary to clarify, that in order to complete this project, it might take six to eight months for investors to travel to Acapulco and make a physical visit to get to know the current conditions of the infrastructure, to define the viable areas of the land where the solar farm panels will be installed and formalize the concession of the project to start the works.

From 600 participating cities around the world, Acapulco was chosen among the 10 finalists of the International Invitation to present the project at the Tenth World Urban Forum. It is the first time that Acapulco attends the World Urban Forum representing Mexico, with finalist projects for the management of financing in the Investment Platform in Cities (PIC) of UN-Habitat, where the participation of Acapulco has marked a historical precedent.

In the United Arab Emirates trip results presentation, the trustees were Javier Solorio Almazán and Leticia Castro Ortiz, the councilor María Guadalupe Cortés Mendoza, the General Secretary of the City Council, Ernesto Manzano Rodríguez, and consultant Paloma Ordaz Cortés, coordinator of Special Projects of the Secretariat of Planning and Development.

Source of the Original News –