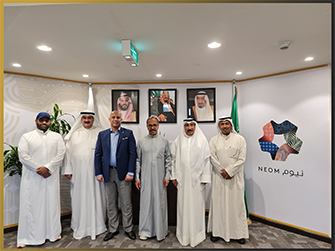 “The visit to the city of NEOM in the Kingdom of Saudi Arabia was positive because as much as we were happy with the initial results of the meeting, we witnessed the extraordinary development and progress of this project, which ranks as one of the key global projects around the world,” George Matharu said.

NEOM is not a project, but building an entire independent economy. It is a city being built in Tabuk Province in northwestern Saudi Arabia. It is planned to incorporate smart city technologies and function as a tourist destination. The site is north of the Red Sea, east of Egypt across the Gulf of Aqaba, and south of Jordan. It is planned to cover a total area of 26,500 km2, extending 460 kilometers along the coast of the Red Sea.

The project has an estimated cost of $500 Billion. On January 29, 2019, Saudi Arabia announced that it had set up a closed joint-stock company named NEOM. The aim of this company, which is wholly owned by the Public Investment Fund (the Saudi sovereign wealth fund), is to develop the economic zone of NEOM, and the project is planned to be totally powered by renewable energy sources.

Mr. George Matharu, MBA, concluded his statement by saying, “Working with a great organisation like NEOM, especially with its open-minded and practical management, will be a pleasure. We look forward to discussing and implementing our finance and technology offerings, which are fully aligned with the UN Sustainable Development Goals.”