NEOM is not a project, but building an entire independent economy. It is a city being built in Tabuk Province in northwestern Saudi Arabia. It is planned to incorporate smart city technologies and function as a tourist destination. The site is north of the Red Sea, east of Egypt across the Gulf of Aqaba, and south of Jordan. It is planned to cover a total area of 26,500 km2, extending 460 kilometers along the coast of the Red Sea.

The project has an estimated cost of $500 Billion. On January 29, 2019, Saudi Arabia announced that it had set up a closed joint-stock company named Neom. The aim of this company, which is wholly owned by the Public Investment Fund (the Saudi sovereign wealth fund), is to develop the economic zone of Neom, and the project is planned to be totally powered by renewable energy sources.

The Crown Prince and Chairman of the NEOM Board of Directors, His Royal Highness Prince Mohammed bin Salman, discussed and deliberated with members of the project’s Founding Board – in addition to experts and specialists in the field – about an appropriate name for such a project with a global outlook. When the Board conducted its first meetings to address related topics, among the agenda items was the search for a name that represents the identity and symbolism of this dream project, as HRH saw that the name expresses the cultural and civilizational dimension of the universality of the project. A series of discussions were circulated about the significance of the name and how it should reflect the project’s global identity, human dimension and remarkable ambition.

The actual name designation journey began by defining criteria, qualities and conditions, all of which bear a clear and firm vision for selection; then, sorting and testing the lists of names proposed by the consulting team. The list included 2,000 names, which was further reduced – as per the standards and requirements – to 150 names, and then reduced again to five names. However, none of them was chosen or agreed upon.

During the Founding Board discussions, some members considered giving the project the name of HRH, the President of the Founding Board, either directly or by incorporating his name within the project name. As such, two names were suggested: “NEOVIA MBS” and “NMBS,” but the opinions of the members were split. The team that was not in favor clarified that HRH, the Chairman of the Board, leads major national projects, and HRH being Chairman of NEOM Board of Directors is sufficient to deliver a message to the world that reflects the direct connection of HRH to the project. They did, however, support HRH’s principal idea that the name should be neither Eastern nor Western, and also not belonging to a specific language or culture, in addition to being neutral and rather open to the entire world.

The Board members then brainstormed for words representing the project sectors and its basic pillars. What followed was choosing the initials of those sectors and merging them to obtain a distinctive name that preserves the identity of the project, and this resulted in the name “NEO MSTACBEL,” whose initials MSTACBEL symbolize the main project sectors, such as Media, Sport, Technology and Energy. And then the word was abbreviated and symbolized by the letter M, meaning “Mim” in Arabic as a symbol for two words: It is the first letter of the Arabic word for future (mustaqbal) and also the first letter of the name of HRH Prince “Mohammed” bin Salman. Then the letter “M” was merged with the word “NEO” from the Greek language, which means new, to form the name that constitutes the beacon of change in the world. The name “NEOM” was henceforth formed and agreed upon unanimously by the Board.

Thus, the name NEOM was formed with the approval and endorsement of the Founding Board as the official name of the project; a true reflection of NEOM’s vision and the reality that will be achieved – Allah willing – to contribute to building a promising future for future generations. From that moment on, the lights of NEOM have pierced the sky, heralding a luminous dawn, a promising future, and a rich life in a land built by man for the sake of all humanity.

8:30 AM – The delegation of Deals Secure Group Holding Company and Elite Capital & Co. Limited gathered at Sheikh Saad Al-Abdullah Airport in the State of Kuwait. 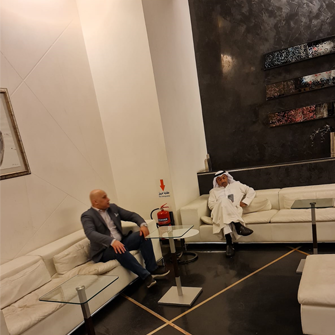 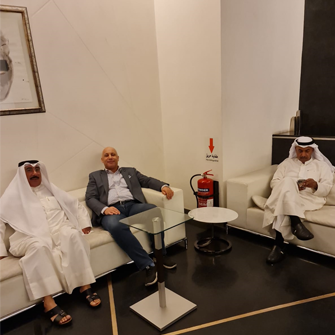 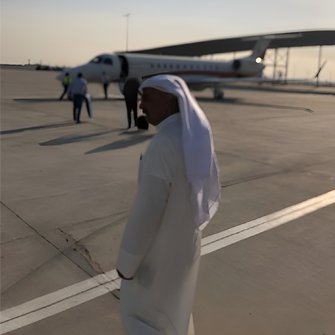 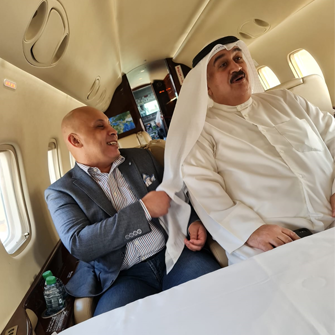 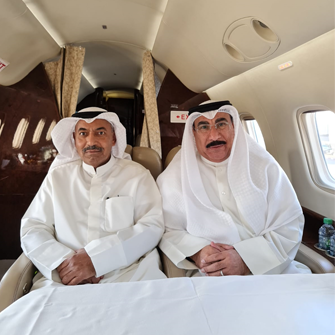 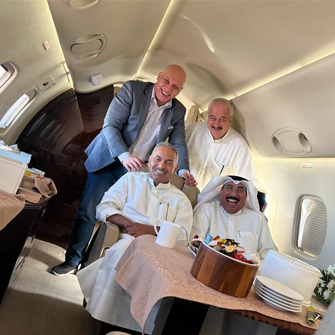 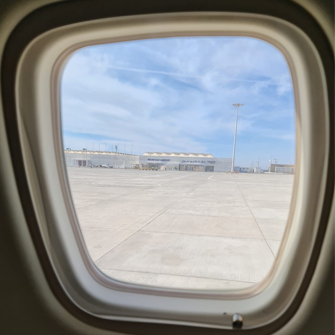 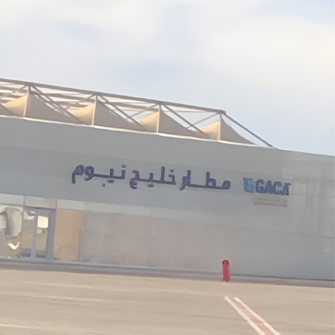 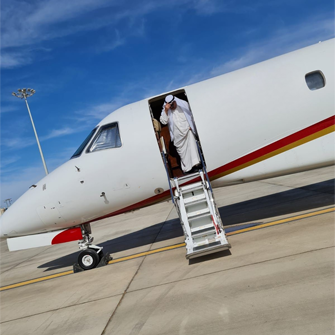 11:36 AM – The delegation of Deals Secure Group Holding Company and Elite Capital & Co. Limited arrived at the NEOM management center, where they were received by Eng. Nadhmi Al-Nasr, CEO of NEOM, and the senior management team, and they all had an early lunch as a kind of welcome to the visiting delegation.

12:18 PM – Everyone moved to the main meeting room to join other teams from Jeddah and Riyadh via video technology, where they exchanged information about the city of NEOM, as well as Elite Capital & Co. Limited, and reviewed the potential possibilities for joint work. At the end of the meeting, everyone took souvenir photos on this occasion, where Dr. Faisal Khazaal thanked Eng. Nadhmi Al-Nasr and his team for the good reception and hospitality. 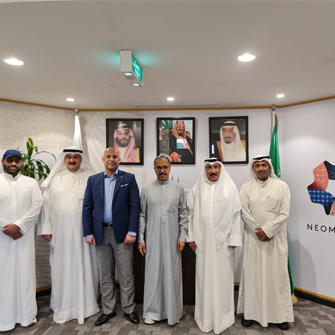 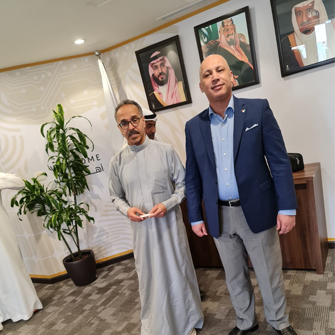 2:25 PM – The NEOM administration provided a helicopter 30 minutes tour to explore the projects in NEOM, as well as delivering the delegation of Deals Secure Group Holding Company and Elite Capital & Co. Limited to NEOM Bay airport. 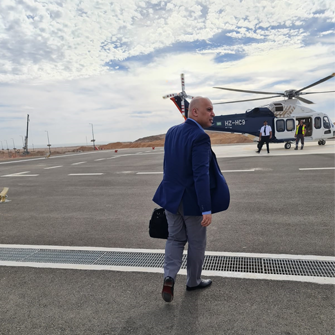 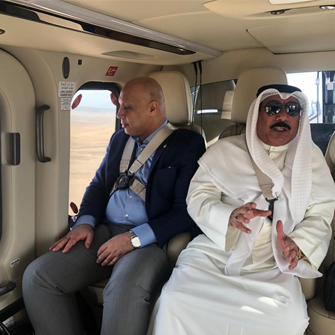 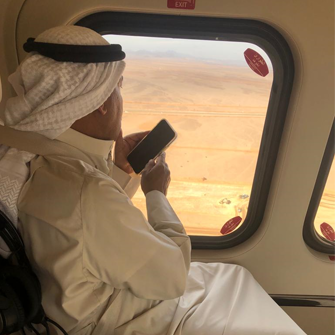 2:56 PM – The delegation arrived at Neom Bay Airport to complete the travel procedures and request permission from the competent authorities to take off to the State of Kuwait on time at 3:30 PM. 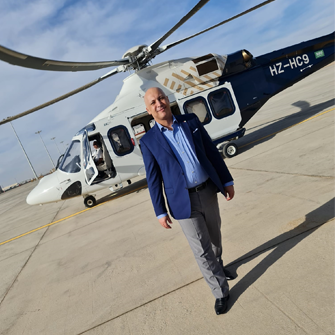 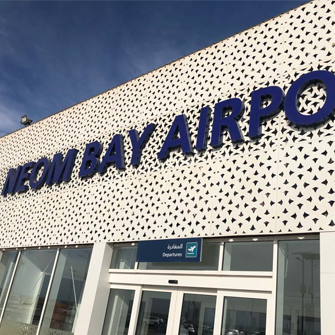 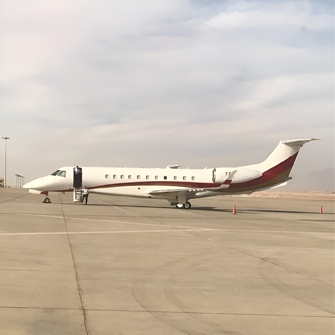 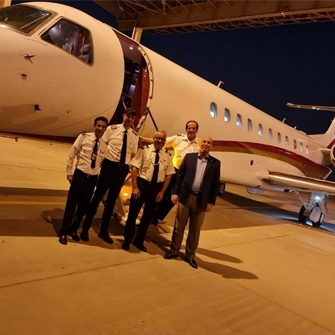 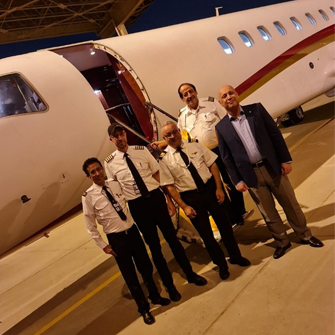 Note: The times mentioned are Kuwait and Neom Time.