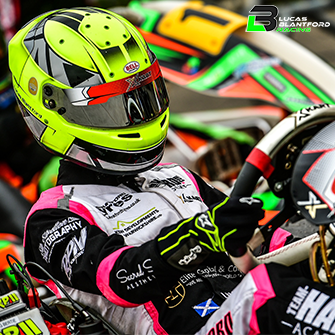 “We headed to the south of England for Round 4 of the Junior Kart Championship, a national karting race held at 8 different kart circuits around the UK. This is a track Lucas has never been to before and whilst out for the 1st practice on Friday, hit a Large kerb which made him jump out of the seat, catching his ribs on the edge of the seat on the way back down. We continued with the testing session but Lucas was showing discomfort so finished the day prematurely. Saturday Lucas felt a bit stiff but we applied heat treatment and he wanted to continue but again we cut the session short due to his discomfort. That night we headed to the local hospital where they diagnosed fractured ribs and told us various painkillers he could take. Lucas was then given the opportunity to end the weekend or continue to which he said he wanted to continue with the weekend. Sunday was race day and we headed to the track, with various pain killers as prompted by the hospital and before the 1st heat applied padding and bandages around the area and out he went,” Adrian Blantford said.

Heat 1 saw Lucas make a mistake that cost putting him down the grid. His team told Lucas to pit, and save the tires as they not going to catch the pack up finishing a disappointing P12. Heat 2 saw Lucas show not only his driving talent but also the determination to succeed by driving through the pack and finishing P1. Heat 3 again Lucas showed outstanding grit and drove extremely well picking off drivers and crossing the line in P1.

“Lucas, despite his young age, showed a huge amount of commitment and tenacity. He was given complete freedom to complete the race or go home, but chose to race. This was all done after checking his safety by field doctors,” Adrian Blantford said.

Starting the final in P4 on the grid this was going to be the toughest race that day as the injury was really starting to take its toll at that moment, but as Lucas already showed the watching spectators the sheer will to win was beyond belief. After getting knocked off the track on lap 1 he found himself 1.5 seconds off the leading trio but lap after lap he drew them back in before making his move into the lead with 2 laps to go. A position that didn’t change and he crossed the line taking the chequered flag first. Once back in parc feme, the emotion of the day took over with the team as Lucas just gave everyone a masterclass in bravery, determination, and the will to win.

Mr. Adrian Blantford concluded his statement by saying, “At the end of this statement, I would like to convey Lucas’ thanks to everyone on Lucas Blantford Racing Team, and our team sponsor for 2022 Elite Capital & Co. Limited.”