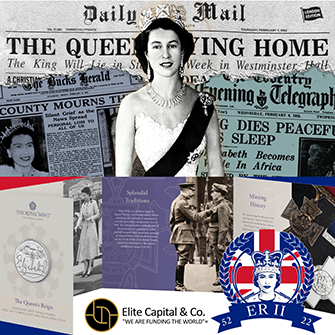 “The Board Members at its meeting today decided to provide an additional salary to permanent employees in all countries in which Elite Capital & Co. operates for this month, as well as to provide a commemorative coin issued by the Royal Mint for this occasion to the Board Members and the Regional Directors. This is the first UK coin to feature The Queen’s signature,” Mr. George Matharu, CEO of Elite Capital & Co. said.

Elite Capital & Co. Limited’s head office is located at 33 St James’ Square, London SW1Y 4JS, United Kingdom with our Board Members, Staff, and Agents being located across the Middle East, North Africa, Asia, Europe, and South America. It also has multi-lingual staff to ensure accommodate all of the clients’ needs.

“It was decided to add a symbolic logo on the occasion of the platinum jubilee of Her Majesty Queen Elizabeth II at the top of the Elite Capital & Co.’s website throughout this year until the beginning of January 2023 in order to express our company’s loyalty to Her Majesty,” Dr. Faisal Khazaal, Chairman of Elite Capital & Co. said.

Elite Capital & Co. Limited offers a wealth of experience in Banking and Financial transactions and has a range of specialized advisory services for private clients, medium and large corporations as well as governments. It is also the exclusive manager of the Government Future Financing 2030 Program®.

Elite Capital & Co. Limited has designed and launched the first one-of-a-kind financial system under the name ‘Government Future Financing 2030 Program’ back on the 15th of January 2020 to provide financial support rather than lending to Governments.

Dr. Faisal Khazaal and Mr. George Matharu concluded their statement by saying, “We are happy with this celebration, which touches every British company and individual, wishing Her Majesty Elizabeth II continued good health, and the Royal Family continued prosperity.”