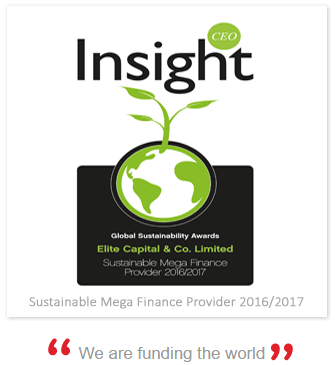 The Global Sustainability Awards are based on over 31,000 survey respondents from private and institutional investors through to treasury and government officers World-wide, and in excess of 5,000 votes were received for different sustainable Award categories.

As part of receiving the Award, ECC will be attending the Abu Dhabi Sustainability Week (ADSW) conference from 14-21 January 2017. ADSW is the ground-breaking global forum that unites thought leaders, policy makers and investors to address the challenges of renewable energy and sustainable development. With the global population set to reach nine billion by 2030, ADSW promotes collaborative thinking and development to accelerate the sustainable solutions needed to support rapid economic and population growth. ADSW is an Abu Dhabi government initiative, the largest gathering on sustainability in the Middle East, and a significant forum in stimulating the international dialogue and action. Elite Capital & Co. hopes to meet its clients at the conference to celebrate receiving the Award, and looks forward to new discussions and alliances.

Mr. Simon Thomas, ECC’s Head of Finance, said “Our company has made significant efforts to design turnkey solutions for renewable energy projects, which often have a very wide scope and a complex structure, with our team acting as the ‘glue’ between the different project stakeholders.”

ECC is a private limited company that provides project related services including Management, Consultancy and Funding, particularly for large infrastructure and commercial projects.

Elite Capital & Co. Limited has made strategic alliances with several organizations and companies which have given us access to international markets in Asia, Africa, Middle East and GCC regions. This has given ECC a substantial foundation of clients to build on, in addition to access to the markets that are most in need of the products and services.

ECC’s services are suitable for all types of Infrastructure Projects in either Greenfield (Pre Operations Stage) or Brownfield (Operations Stage) including but not limited to Sea Ports, Airports, Railway, Bridges, Roads and Highways, Water and Sanitation Utilities, Energy, Communications, Hospitals, Schools and Social Infrastructure etc. This includes other projects or activities that impact positively on the relevant country’s basic infrastructure including the manufacturing of components used in infrastructure (such as cement and steel) and infrastructure associated with mining and agribusiness.

To conclude the company’s statement, ECC’s Chairman Dr. Faisal Khazaal said, “I would like to thank everyone that voted for us to win the Sustainable Mega Finance Provider 2016/2017, and we look forward to seeing you at the Abu Dhabi Sustainability Week (ADSW) conference from 14-21 January 2017.”