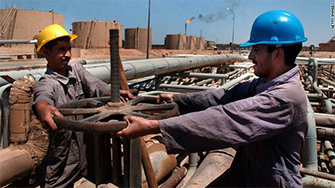 Dubai, United Arab Emirates (AGENCIES) December 21, 2014 — The recent protests in Jordan against the energy sector crisis and the visit of the Egyptian Prime Minister, Hisham Qandil, to Amman to discuss the gas file has shed light once more on this sector. Many investment destinations tried to look for opportunities through the construction of oil installations but they have faced obstacles for many reasons.

In this context the Kuwaiti businessman, Faisal Khazaal, Chairman of “Dales Secure Group Holding Company (General Partnership)”, has claimed that he is reassured to enter the Jordanian market whatever the circumstances are under political stability provided by the presence of His Majesty, King Abdullah II. in Khazaal’s point of view.

Khazaal claimed that he had officially expressed his wish to invest in the energy sector after his initial attempt back in 2010 when he launched a project in Aqaba to build a large oil refinery which at that time had investment capabilities of a billion Euros that has been allocated by international banks back then. The refinery was intended to serve the entire region stretching to Europe by providing all kinds of oil products. Unfortunately his efforts were blocked by some entities who are now being chased by the law and are charged by corruption.

Khazaal , who holds a PhD degree in international law, said that he thought of this investment because of the geographic location of the Kingdom in the presence of Aqaba Gulf, that will largely save the European countries and the oil companies the cost of transportation from Iraq and the Gulf. He also said that this project will limit the time and the transport needed to refine crude oil in European refineries and exporting them various countries, to be in reach of the customer.

He explained that the project may contribute in supporting the consumption of Jordanian citizens of oil and its products locally in case the Kingdom needed support for its local markets.

He confirmed to CNN Arabic that his project captured the attention of the International Parliament for Safety and Peace a subsidiary organization of the United Nations who wished to participate in the negotiations because of its belief that the project “will contribute to peace and safety in the region”. Sadly, the negotiations were “suspended” by those who were responsible for following up the file in Jordan.

Khazaal believed that Deals Secure Group Holding Company along with the banks that were behind this gigantic project considered the outcome of the negotiations “individual decisions and not political decision tide to the Summit of political hierarchy in Jordan” referring to the existence of fresh plans that are bigger than oil refinery project which will contribute towards the revival of the Jordanian economy; the group is hoping to providing it to the leadership in the The Hashemite Kingdom of Jordan at the beginning of the new year 2013.

On the other hand, official sources in Jordan pointed that there is no legal constraints that may prevent constructing an oil refinery in the port of Aqaba especially that the governmental monopoly over the oil sector by the Jordanian Petroleum Refinery Company has come to an end in March 2008 after lasting for over half a century.

However, the Jordanian government has not granted any licenses to build oil refineries, and restricted oil sectors activities in Aqaba on the storage and distribution of derivatives or building tanks by licencing three companies to sell the said materials including a subsidiary (in 2009) of the Petroleum Refinery.

General Manager of Aqaba Development Corporation – the investment arm of Aqaba Special Economic Zone Authority, Ghassan Ghaneme said that the granting opportunities to build a refinery in Aqaba is “restricted” pointing out that even in 2010 there were still “exclusivity of Jordan Petroleum Refinery” He added: that the” exclusive actually hasn’t finished unless less than a year ago and now the discussion of such things are available, but there are other details regarding the nature of activities that can be allowed to be done.

In contrast, the former Jordanian Minister of Energy Mohammed Batayneh, had reassured that there was no legal impediment from the consent of the Government of Jordan to create or build an oil refinery in Aqaba, but said, “a political decision prevents it”. In a statement to CNN Arabic he declared “not granting license to build a refinery is “unjustified” and that the government is vague in this matter.

He further clarified that he met with a number of investors during the past few days who expressed their desire to build a refinery in Aqaba and applied to the Jordanian government without consent. Rejection has impacted some investors in the mining sector as well. Official resources have confirm to CNN Arabic the possibility of governmental intention not to grant any licenses to build an oil refinery, saying that there is a so-called “neutral period after the expiration of the monopoly” of which a Petroleum refinery shall be initiated for an expansion project after the the said grace period.

The issue of oil refinery expansion project has encountered many arguments during the past two years and troubled the continuity of the fourth expansion project as a result of the backdrop of government officials in the trial in July 2010 on charges of bribery in the expansion tender.