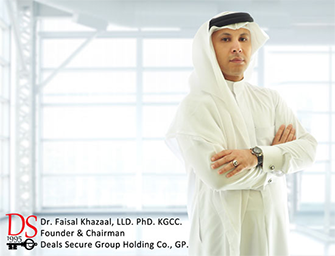 Kuwait City, Kuwait (AGENCIES) April 24, 2004 — American Biographical Institute (ABI) announced that it rewarded its 2004 Man of the Year Award to the Kuwaiti Businessman Faisal Al-Khaz’al, the CEO of Deal Secure. The institute sent a letter to Dr Al-Khaz’al, who got his Ph.D. in International Law from the UK and owns a number of banks, investment companies, and oil refineries around the world, to inform him that he was given the Man of the Year award.

The letter says that the decision was made after studying a number of biographies for international male and female personnel, but Professor Al-Khaz’al was chosen “because of his perseverance and dedication toward contributing to a better society by building better communities through outstanding service on local, state, and international levels”. The letter added that “Professor Al-Khaz’al has set a fine example because of his outstanding service, accomplishments, and excellence within the community and to his profession”.

The letter said that the institute is a reference publisher documenting biographical information for research. “ABI reference source books are used by and provide authoritative guides for business consultants, researchers, reporters, scholars, biographers, librarians, corporations, interviewers, students, historians”, and a number of other specialists. The institute noted that its publications about international biographies are being used nationally, regionally, and internationally since the establishing of the institute in 1967.

Al-Khaz’al is the first Kuwaiti citizen to receive such a high-level international award, which is another proof of the success of the Kuwaiti businessmen in different fields. (end)