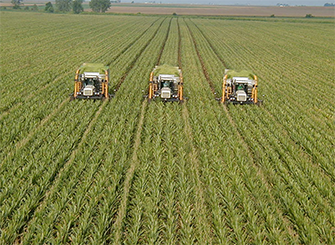 Kuwait City, Kuwait (AGENCIES) July 7, 2003 — The Kuwaiti Deals Secure Group declared it has purchased a 55 percent share in a British factory specialized in the production of an agricultural material that is expected to be an important competitor of the vital urea substance used as a fertilizer in most of the agricultural countries. Board Chairman and Executive President of the group, Dr. Faisal Khazaal told KUNA Monday that the group purchased a 55 percent stake in Dorest Hills Organics factory, established five years ago, after carrying out feasibility studies that proved the importance of the new product and the potential to produce and market it internationally.

Regarding the most distinctive traits of this agricultural product, Dr. Khazaal said that it is a small storage material, which requires about 25-30 ‏of the urea’s storage room. He added that this new substance does not leave behind salts in the soil and helps the plants to resist the moths, a matter that makes it work as an antibiotic and helps produce bigger fruits without using hormones that harm the human health.‏ He expects this substance to be widely distributed in the world markets, hoping that the financing costs made by the group, which reached 57 million dollars, would be covered in a short time.‏ The Kuwaiti anticline petroleum consultative office, headed by Musaab Ahmad Al-Basei’, will be assisting the group to search for distributors and agents for the new product in the region and the world, he pointed out.‏

Deals Secure Group owns shares in several international companies and banks in Kuwait and abroad, such as the united investment bank, which carried out the financial work of the factory.‏ A website, Dr. Khazaal said, will be constructed later this month at the internet that will include all the relevant information of the product, the agents and distributors in each country. (end)