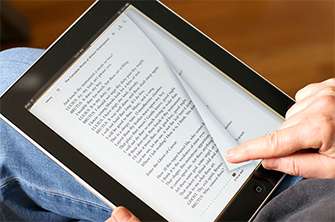 Kuwait City, Kuwait (AGENCIES) December 26, 2002 — Kuwait will launch the first e-book in Arabic at the start of 2003 within the framework of a comprehensive project to connect modern technology with culture. Chairman of the Deals Secure Group, Dr. Faisal Khazaal, told KUNA on Thursday that an experimental copy of the book was issued to the public and a survey was conducted over it, which proved to be very successful.

Kuwait will be the first country in the world to issue an e-book in the Arabic language for millions of people to read, he said, noting that the company will issue an e-book for the Kuwaiti author, Ismael Fahd Ismael, in honor of his work. Dr. Khazaal said the e-book will spare us thousands of pages that would be saved on a CD in the size of an ATM card. The e-book will save people a lot of space in their libraries and as for college students, the university’s library will transfer from its traditional look to rooms filled with e-books that are extremely secured to prevent any tampering with the information, he continued. On the cost of issuing an e-book, he said Kuwait’s first e-book will be financed by the United Investment Bank (UIB) and that the bank is willing to help any writer by paying part of the costs and offer installments to cover the rest of the cost, aimed at selling the book at a price lower that its cost. He concluded that the e-book is also considered to be one of the top examples of protecting the environment because it cuts down on the consumption of paper. (end)