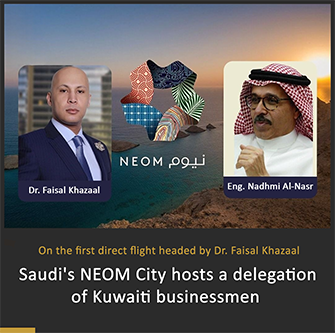 “The second reason is that the program is managed exclusively by our subsidiary Elite Capital & Co. Limited in England, one of the approved entities to finance the government and private projects for the G20 countries, of which Saudi Arabia is one of the prominent members. Thus, we are halfway through before the journey begins, since NEOM city is an attractive investment destination for GCC, Arab and international capital, and since Elite Capital & Co. Limited in England is affiliated with Deals Secure Group Holding Company in Kuwait,” Dr. Faisal Khazaal said.

Dr. Khazaal confirmed that the commercial delegation will meet with Eng. Nadhmi Al-Nasr, CEO of NEOM city, and the administrative team to discuss the aspects of joint cooperation and brainstorm necessary ideas and proposals related to this giant project.

He said that the private sector is always looking for good investment opportunities and examining viable investment options, especially government projects. He also stated that the Kingdom of Saudi Arabia has opened doors for investors, capitals, and financiers to benefit from the projects that will be established in NEOM city in order to achieve the desired goals and the best possible returns.

Dr. Khazaal pointed out that the commercial delegation includes Dr. Faisal Khazaal, Chairman, Dr. Adnan Al-Thewainy, Adviser to the Board of Deals Secure Group Holding Company, and Dr. Jamal Al-Gharabally, Managing Director and Eng. Waleed Al-Hashash, CEO of Maseela Independent Group for Trading and Contracting Co., who are two of the most prominent figures in the oil and petrochemical industry in Kuwait, as these two companies are active members of the Kuwait Chamber of Commerce and Industry and Al Maseela Independent Group is one of the consultants of Elite Capital & Co. Limited in the GCC region.

It should be noted that NEOM city is a Saudi project for a planned cross-border city, launched by His Royal Highness, Prince Mohammed bin Salman Al Saud, Crown Prince of Saudi Arabia and Prime Minister on October 24, 2017. The project is located in the far northwest of the Kingdom of Saudi Arabia in the Emirate of Tabuk province and extends 460 km on the coast of the Red Sea. The project aims, within the ambitious aspirations of the Saudi Vision 2030, to transform the Kingdom into a leading global model in various aspects of life, by focusing on attracting value chains in industries and technology within the project.