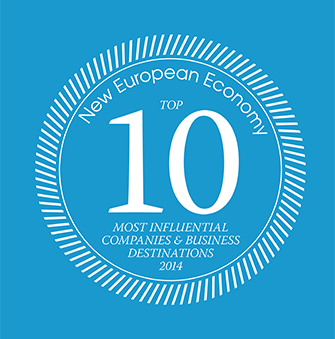 London, UK (AGENCIES) October 22, 2014 — Mr. George Matharu, President and CEO of Elite Capital & Co. Limited (ECC), announced today that the success of being in the New European Economy Magazine’s “Top 10” was the result of enormous effort and teamwork within the company since it was founded in 2012.

The Top 10 Most Influential Companies & Business Destinations list was as follows:

Elite Capital & Co. Limited has been defined in the list of the Top Ten as “a private limited company that provides project related services including management, consultancy and funding, particularly for large infrastructure projects. ECC offers a wealth of experience in banking & financial transactions and has a range of specialized advisory services for private, SME or corporate clients. When required it can also customize and structure products and services to meet the specific needs of clients. It will continue to customize, structure, create and implement funding products and services as the need requires. ECC has made strategic alliances with several organizations and companies which have given it access to international markets in Asia, Africa and Middle East”.

George Matharu, in his statement, praised the support of Dr. Faisal Khazaal, Chairman of the Board of Directors, who boosted the engine of the Elite Capital & Co. Limited over the past two years; “Dr. Khazaal is responsible for the development of the fruitful business strategies with the customers on a local, international and the governmental level by using his relationships and influence that he has gained over time being the Chairman of the parent company Deals Secure Group Holding Company GP. (DSGH) since its founding in 1995”.

Elite Capital & Co. Limited has made strategic alliances with several organizations and companies which have given them access to international markets in Asia, Africa, Middle East and GCC region. This has given ECC a substantial foundation of clients to build on, in addition to access to the markets that are most in need of the products and services they offer. The aim of ECC is to facilitate the commencement and completion of Infrastructure projects, stimulate economy, create employment and combat poverty.

“Our services are suitable for all types of Infrastructure Projects in either Greenfield (Pre Operations Stage) or Brownfield (Operations Stage) including but not limited to Sea Ports, Airports, Railway, Bridges, Roads and Highways, Water and Sanitation Utilities, Energy, Communications, Hospitals, Schools and Social Infrastructure etc. This includes other projects or activities that impact positively on the relevant country’s basic infrastructure including the manufacturing of components used in infrastructure (such as cement and steel) and infrastructure associated with mining and agribusiness”. Mr. George Matharu, President and CEO of Elite Capital & Co. Limited, said.

ECC’s services depend on four types of “Funding Collateral”.

1. Commercial Bank Instruments; Bank Guarantees, Bonds, Medium Term Notes, or other Bank Debt Instruments issued by banks rated ‘B+’ or better, but this can be reviewed on a case-by-case basis.

Mr. George Matharu concluded his statement by saying “the article in New European Economy magazine would serve to enforce the company’s current business relationships, and help to foster relationships with new or prospective clients”.